On a Saturday night, while waiting for my computer to do some stuff, I fell back into my old bad habits of gear shopping on OfferUp and eBay…

…seriously, I’m trying to get this under control, the next time I’m on these sites will be to list some stuff, I swear!

Anyways, what did I spy with my little eye when looking at some Fender Telecasters? A little boutique tube combo amp from some

company I had never heard of before, paired up with a Fender Modern Player Telecaster Plus and some rando pedals all for $500 bucks. I did some quick mental math and figure I can sell the guitar and pedals for about $300-400 bucks, leaving me a tube combo amp for $100-200. This deal could work!

I did some Googling and YouTube surfing to see what I could find out about this lil amp. First I found the amp’s website (crimsontone.com) and learned that it’s custom built, locally in Mesa, Arizona. And then I saw the price of this thing, $1729.00, “on sale.” Sheesh, what is this thing? A car?

With these numbers I couldn’t lose, so I sent this guy an offer of his full asking price and spent the rest of the night trying to find videos and learn more about this company.

There really isn’t too much out there on Crimsontone M68’s, but here are some links to what I did find:

The next morning, Sunday Funday, I woke up to the seller’s message back, he said was down for the deal, so we had a little back and forth to figure out a time and place to meet, and settled on Fry’s Food near him in BFE Mesa…he probably called this place home, buttttt I’m pretty sure this place is where the BF’ing in Egypt definitely goes down. ;D

When it’s time to meet him, I hop in my car and run over to the bank real quick to get some cash for the transaction. Of course it’s impossible to get $500 on a Sunday from one ATM so I head out to BFE with only $450 buck in my pocket and hope for the best. Next, I hop on the freeway and I’m doing like 80 when my brain said something to me like, “hey man, you can’t afford zero amps if you get a ticket doing 25 over the speed limit man…” So I slow my shit down and some other jack ass flies past me doing like +20mph faster than me and my brain says to me, “…Sweet! That dude can get all the tickets!” So I speed back up to 70 and then out of nowhere, this cop pulls right up behind me, lights flashing. I crap my pants and say goodbye to this OfferUp deal…the cop even turns on his siren to get my heart really pounding. My brain is all, “what the fuck man, that other dude was doing like 95 tho?” I gulp and make my way to the right…suddenly the cop flights right by me and goes after the bad guy!!! “Hell yeah cops, go get ‘em!” The next 40 minutes of driving were boring and I just listened to podcasts while other drivers flew past me doing 10-20 mph over the speed limit. 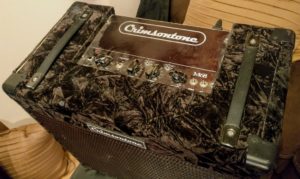 Finally I get out to BFE and meet up with TJ (I don’t know what TJ stands for but I’m going with “The Jams” because that’s what this guy is delivering). He tells me he’s taken in all this stuff through various trades over the years but now he’s all old and got kids and stuff like that. Kids never let you rock or kick out the jams…well maybe they do kick out the jams in the sense that they kick your guitars and amps out of your house. I started looking over the gear and condition of the equipment was a little bit disappointing. The stuff looked more like it was hanging out with his kids in their playpen, everything sort of covered in that slight stickiness, dirt, and boogers trail kids leave. The amp had places where the crushed velvet had been pulled up and some of the stickering was curling, possibly from the heat of the tubes. The Tele had a knob that spun forever, was missing a pickguard screw, and had the dirtiest, deadest strings I’ve ever played (and my band mate won’t change strings for like 10 years if he don’t have to). Overall, no big problems, but I still thought everything would be a little nicer and plus I don’t get to try out anything so I asked TJ if he wouldn’t mind taking $450 for the stuff, explaining that ATMs don’t believe in 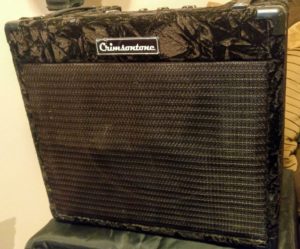 giving you all the money you ask for on Sundays or whatever, but he wasn’t hearing that noise and gave me 57 other options where I could easily come up with $50 in like 2 seconds. I ended up grabbing myself a Rockstar and $50 bucks cash back from Fry’s, gave TJ the stacks of cash and hit the road…for another 50 minutes…because BFE. 🙁

The Deal is done…

When I finally got home I got a chance to try everything out and make sure it was actually working. Luckily me, everything was working right, mostly only needing a bath, some glue, and a lot of TLC so over all this was a good deal for me. I think TJ gave me a 4 star after I gave him a solid 5, that was a crappy deal. Must be because I gave him the run around on the $50, but as far as I can tell I was the one running around all over the place trying to find some cash like some East Mesa meth head.

Good deal for me and hopefully a good deal for TJ as well. Thanks for checking out my blog. You can watch my video below for my initial thoughts of the gear and please subscribe to my channel for future video reviews, demos, etc of the equipment.