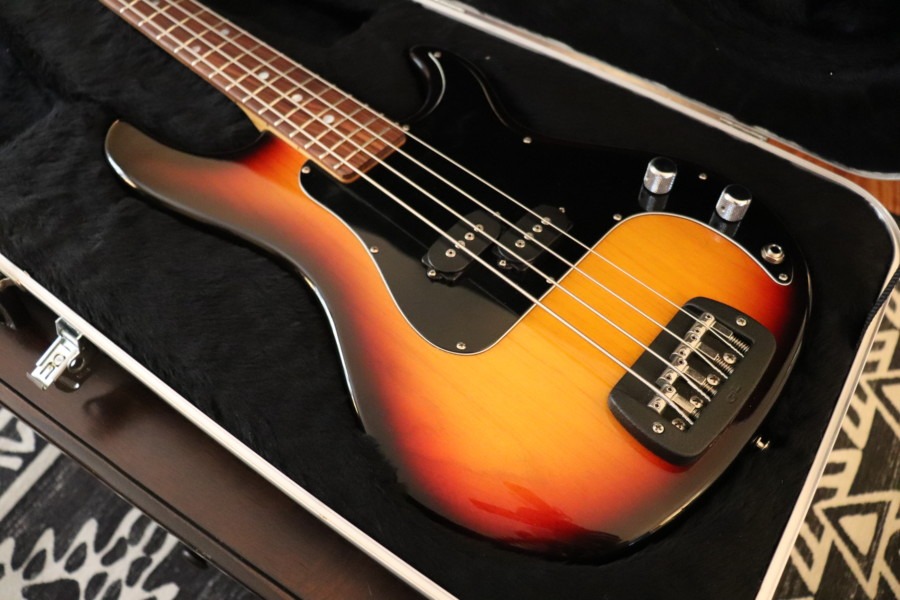 From the 1950’s though the early 90’s Leo Fender help to create and innovate the bass guitar. G&L was his final company and the G&L SB-1 was one of the last iterations on one of his most famous creations, the Precision Bass. This is my story of owning a G&L SB-1.

Leo Fender and long time collaborator George Fullerton founded G&L Musical Instruments in 1980. The two had worked together to create Fender and Music Man prior to G&L. G&L was a continuation of guitar innovation by one of the fathers of the electric guitar.
Some notable innovations of the brand were “Magnetic Field Design” (or MFD™) pickups, “Dual Fulcrum Vibrato“, “Saddle-Lock Bridges“, “Tilt Neck Mechanism“, and “Bi-cut Neck Design“. That latter two designs have been phased out of production as G&L has improved design and construction.
Today there is also an Asian manufactured line of G&L which will be attributed with the “Tribute Series” label. These instruments are said to have American manufactured hardware with Asian necks and bodies and assembly.

In 1982, the G&L SB-1 was launched as a new take on the classic Precision Bass. The original offering was package significantly differently than it is today with main differences being the absence of a pickguard and a single pickup that looks like a cross between a P-90 and a Jazz Bass pickup but has the MFD design features. Today it looks much more like it’s older brother, the Fender Precision Bass with it’s biggest difference being the MFD P Style pickup and G&L signature headstock. G&L SB-1 is usually equipped with a slimmer, more Jazz Bass style 1 5/8″ neck, is more contoured and lighter weight than most standard P-Basses, and their MFD pickup is a much more aggressive, modern sounding pickup. You can identify an MFD pickup by the allen key adjustment hole in the extra wide pickup pole pieces.

While a modern Precision Bass will have string through bridge design, Leo fender took a different approach to in designing the Saddle-lock Bridge. There are two important features to point out about the bridge. First is the saddle-lock. There is a small screw that locks tightens down to lock all of the saddles together once the bass is set up. This will ensure intonation and sustain by providing a rock hard bridge when set correctly. The second feature is a portion of the body is routed out for the bridge to extend in sit into. This will provide more contact between the bridge and the body of the guitar making the instrument more resonate and sustaining.

Over the last two decades since I first discovered G&L I have owned many different models including 2 SB-2’s, 3 L-2000’s, an LB-100, an L-1500, and an ASAT thinline and they have all been awesome! I picked up this one because I found a great price and have always used my SB-2’s with the bridge pickup turned off. This bass was a bit surprising because it came with a #7, chunky P-Bass style neck. Essentially this thing is almost a straight up P-Bass spec’d SB-1.

From that information, I would call this a 1993 bass since it couldn’t have been shipped out before May of 1993. I suppose it could have also had a warranty replaced neck or something like that, but after reviewing guitarsbyleo.com I see it’s not too uncommon to have a gap in production dates, especially a one-off kind of neck size like this.

Another surprising thing about this bass is that it has Hipshot tuners. At first I thought they were after market but they don’t look like they replaced original G&L Tuners. I scoured new and completed G&L auctions and Reverb listings for early 90’s basses and it was fairly common for them to have Hipshot or Schaller tuner from the factory.

The last indicator that G&L was probably going through tough times in the early 90’s are the made in Japan volume and tone pots. I was fully expecting standard CTS pots but they simply say, “250K MAKE IN JAPAN.” These don’t look bad, but like a cost cutting measure. A quick Google search returns posts with other early 90’s G&L owners documenting the same thing.

What do I think?

Full disclosure, my main basses are American Standard Precision Basses. I have a 1995 and a 2005 and both had Nordstrand NP4 pickups.

…looks of a champion!

First thing, I loooove how this bass looks! It’s 27 years old at this point in time. Most of the scratches are on the pickguard. It’s in beautiful condition. The 3 tone sunburst is beautiful! It’s my favorite sunburst. Nothing is better than going from jet black, to red, fading into basically wood grain. Black pickguard all the way!!! Amazing. Rosewood fretboard always looks the best and smoothes out those bass tones. And finally, but certainly not least, the bridge looks so rad in black! You can’t beat this bass!

I’m not a neck expert, but it feels like it has the width of a standard P-Bass, but thicker like a baseball bat. This is a serious manly man’s bass!
This bass has a very light and thick fretboard. It almost looks like the pau ferro we saw during the rosewood restriction. The fretboard feels like rosewood but reminds me of the new wood. Still looks awesome, just wish it were a darker variety.

In my band, I play with a bunch of effects and drives. This bass on it’s own has sooo much output from the MFD pickups, it sounds like a P-Bass with a drive in front of it. It’s super aggressive, clear, loud, and modern! But when I put it in front of my pedal board, it does things that I don’t expect so I think it’s best directly into an amp. Today, I like to take a more vintage sound and crank it up into a monster…this guy is already a monster!

That said, the whole process of making this video and getting to know this bass makes me sad for the day it leaves. This is one baddd bass!

…First Video I Made of this Bass