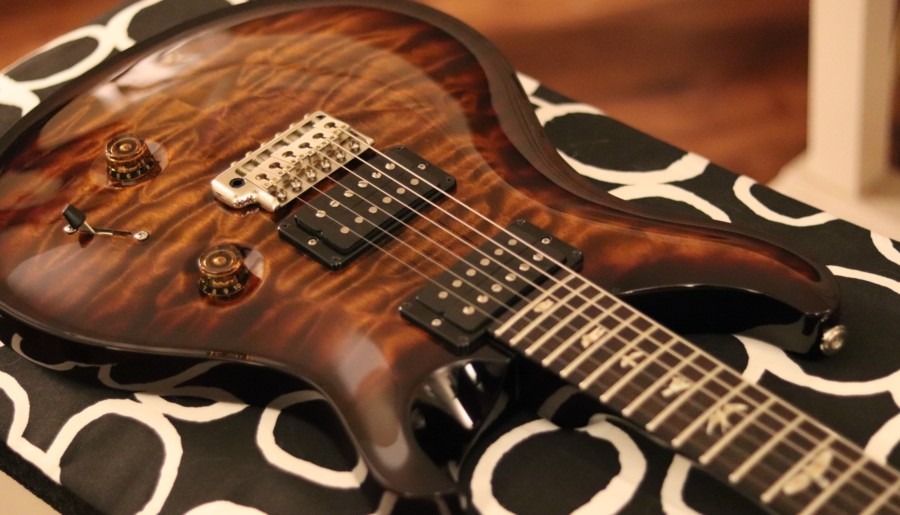 I have never been a huge fan of PRS’s but when my band mate told me he was selling his PRS Custom 24 Quilted 10 Top, I jumped at the offer!!!

…to sell it for him. Haha of course I can’t really justify having such an expensive guitar. Last time I had such a nice guitar, it lasted all of about 3 months before I had to sell it to pay for some repairs to my house. But seriously, I would love to buy it from him. He’s looking for around $2,800 for a guitar that is now $4,200 plus tax new. I would guess these things are going to increase another $500 on the used market in the next year so I’m almost tempted to take it over as an investment. 😀

Anyways, look at that dreamy thing…you’d probably be scheming up some ways to keep it if it were at your house too!

Anyways, if you’re interested, it is for sale on my For Sale page and at my Reverb Shop.

Review of the PRS Custom 24

I don’t have enough good things to say about this guitar. I don’t get the chance to mess around with high end guitars nearly often enough but it’s easy to tell this thing is leaps and bounds above something like an American Standard Fender or even a Standard Gibson.

The finish looks and feels amazing. The quilted maple top is absolutely beautiful with clear coat that looks about a mile deep. The neck feels lacquered but not sticky…just definitely not satiny. The weight (7 lbs, 8.5 oz) and balance make this a guitar you can play throughout a 4 hour set.

The rosewood fretboard almost looks ebony in deep, dark color, but still has rosewood texture. The frets are beautiful to a guy like me who’s usually messing around with budget Strats the Arizona heat. No way for these to grow fret sprout. Also I love all the birds. If you look closely each bird had a white border that I had never noticed before. And on the Custom 24 you get one more little bird than on the 22. It’s an owl. What more could you want? 25 frets? No!

Originally this guitar came with cream colored pickup rings, but this one has been modified with black PRS pickup rings, which in my opinion look far better. Personally I prefer the look of metal humbucker pickup covers to these uncovered pickups, but to each his own.

I love the hardshell case. It appears to be a G&G made case, but it may be even fancier than any G&G case I currently have. It’s like a buff G&G. Also I don’t see any G&G branding so maybe they don’t make it.

My only gripe with PRS’s is that while they are the perfect combination of a Super Strat and a Les Paul, they don’t really have a definitive sound. Like, I mean I guess you may be able pick it out of a crowd if you’re some guitar tone expert, but for us ordinary dudes it doesn’t stand out like a Les Paul or a Strat or a Telecaster or an SG even. Kind of sounds like all of those guys but better, more refined, and modern. For me, that’s not really what I’m looking for so it’s a pass.

Final thoughts about the PRS Custom 24

I think at the end of the day, a certain type of player gravitates towards these guitars. If that’s you, you probably know it and this is a perfect guitar for you. For me, I’m a more simple kinda dude and would rather find an old closet Fender that needs some wrenching on.

The Custom 24 is the quintessential PRS guitar. This iconic instrument was the first model that Paul Reed Smith brought to the public at PRS Guitars’ first Winter NAMM show in 1985 and has been a top seller ever since. Played by internationally touring artists, gigging musicians, and aspiring players, the Custom 24 features PRS’s patented Gen III tremolo system and PRS 85/15 pickups with volume and tone controls and a 5-way blade switch. 85/15 pickups were personally designed by Paul Reed Smith to offer remarkable clarity and extended high and low end.
The Custom 24 is the original PRS. Since its introduction, it has offered a unique tonal option for serious players and defined PRS tone and playability.