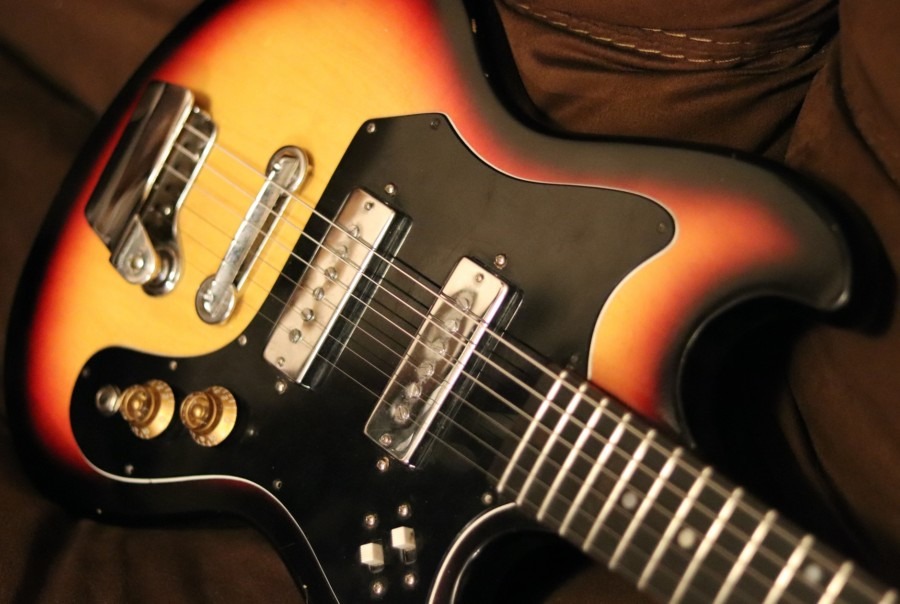 Here’s a little story about a 70’s Global Teisco guitar. There’s something about any 70’s model guitar that makes us gear heads swoon. Personally I give Jack White all the credit for making the worst pawnshop budget guitars into hot shit. But let’s face the facts, that dude can make a nail, a coffee can, and a string sing! Not all of us have that kind of talent, certainly not yours truly.

Now on to the story of how I got my hands on this 1970’s Christmas morning disappointment. One day I was swiping right on some local OfferUp deals when I came across this beauty marked all the way down to $75 bucks. I’ve always been interested in these Teisco style guitars and this deal sang to me…but I was going out of town for the weekend and didn’t have time to mess around with OfferUp dudes so I sent it to my bandmate who actually plays guitar.

Later in the week another friend calls me and tells me we’re after the same guitar. I tell him it’s all his, but I’m more than happy to help him look it over. So we meet up at some guy’s dilapidated lake-view hoarder apartment and my buddy seals the deal on this sweet baby.

My job now is to fix it up so that it can be given a new home. But in the meantime, I’ll go ahead and do some research and make a video to keep myself entertained.

Heard it through the Google vine…

Global guitars are cheap Asian/Korean guitars made for a Chicago importer in the 70’s and 80’s. Although many people seem to believe the company is related to Teisco or Kawai, I am starting to doubt that, even with the similarities between the guitars. I may be wrong, but I think Global is just a Teisco knock off. My best guess is that this guitar was made sometime in the 1970’s or possibly early 1980’s.

How to fix a Global Teisco guitar

Plenty of issues left with this guitar, namely it won’t stay in tune and it won’t intonate properly

If you can find one of these things for $80 or less in playable shape, buy it. You should be able to resell it $100-150 bucks easy, unless they’ve read this blog, then they will probably try to talk you down to $80. It’s definitely a cool little guitar but it’s temperamental and requires skills to make it playable and keep it in that condition. It’s a certainly a cool, old trashy guitar for that certain sound.
The body looks pretty nice at first, but take off the pickguard. It’s actually plywood and that sweet sunburst finish is actually hiding the layers.
The pickups are really low output so you may want to run a boost pedal on the front of your signal chain just to get the volume up to normal levels. The sound of this guitar has that indescribable “pawn shop” characteristic. It sounds like a guitar who needs a drummer who plays on some old metal trash lids.
This thing feels super small, light, and fun to play. Again, don’t give this to your kid, unless you want them to grow up to play EDM.
This may not be your forever or all the time guitar but it will be the one you pull out when you wanna get weird and make some noise. I hope that helps if you’re on the fence about buying one of these.
I have to be honest, I don’t know what model this guitar is so I took 3 guesses. Please email me at dann@doyoulikegear.com if you know what model this is.