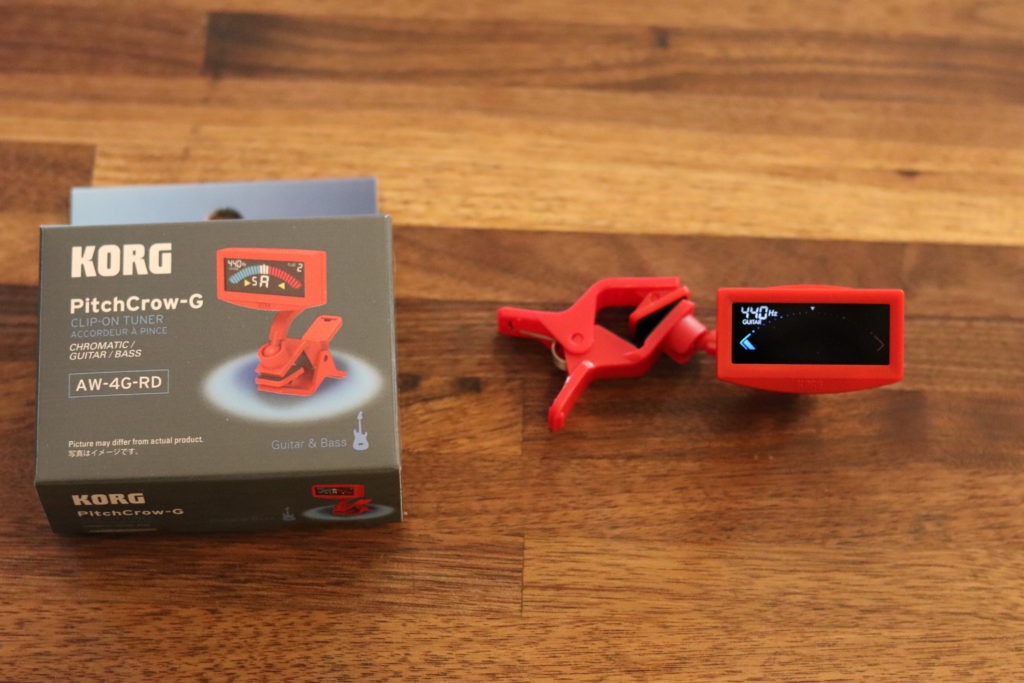 This is the Korg Pitchcrow Tuner 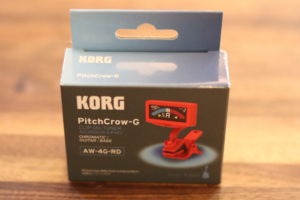 I picked up my Korg Pitchcrow-G Guitar Tuner on a Musician’s Friend Stupid Deal of the Day just to try out and demo on my site. The deal was $25 buck for two of these tuners and I had been looking for a clip on tuner to use when I’m working on guitars. It’s a pain to hook up wired tuners when you’re doing setups or string changes on a bench.

The Pitchcrow-G’s are good small, light weight, portable tuner. You can easily fit them in your hard case, gig bag, toolbox, or even store it on the headstock of your guitar.

The tuner works by using your guitar’s natural resonance to determine pitch instead of requiring a cables and using the instrument’s pickups. You should be able to tune in a noisy atmosphere such as a club or at Guitar Center, since it doesn’t use a microphone to tune.

It has 3 modes; standard tuning on a guitar or bass (E-A-D-G-B-E / E-A-D-G) and the third mode is for any other instrument or non-standard tunings. It works with acoustic and electric instruments.

The display is colorful and easy to read. It has two joints to allow you to set the display to be viewable from nearly any angle.

The calibration is saved for your next usage. For example if you tune slightly sharp or flat of standard tuning, your selection will be saved the next time you use the tuner instead of always resetting to 440hz standard.

The specs say the battery has 24 continuous hours of life and the tuner turns itself off after a few minutes without use to conserve that life.

They are small, but they also seem fragile. They are made of a lightweight plastic that could be crushed in a gig bag or easily broken if not handled carefully…compared to a Boss chromatic pedal tuner. The buttons on the backside could be a little easier to read and press.

It usese a watch battery (CR2032) for power. While this is a common battery and you can probably find one at your local grocery story, most people don’t keep them around. Fortunately, you’ll probably only need a new one once a year or so. On the flip side, you probably won’t have one around when it does die.

In my opinion, all clip on tuners look kind of dorky. I wouldn’t rock one at a live performance or even band practice. Also wouldn’t it be funny if you were rocking out and the tuner just went flying into the audience?

This is a handy tuner to have around. I think it will work perfectly for doing guitar setups and repairs. If I owned a guitar store I would have several of these around for my customers to use. I would recommend this tuner as the 3rd tuner you ever buy. The first would be the free Boss Tuner app for iPhone or Android, the second would be the Boss TU3 Chromatic Tuner Pedal, and this would probably be the second tuner you buy as a beginner but the 3rd most useful tuner.

In the future, I think Korg should continue working on increasing the battery life, make the buttons a little easier to press, and change the plastic they use.