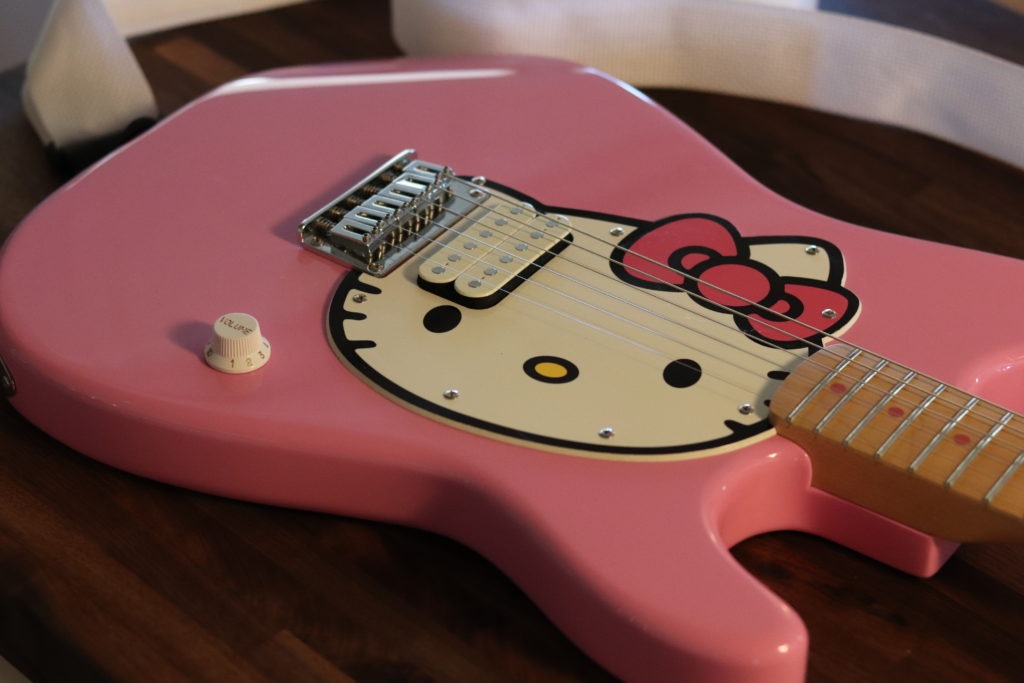 I first heard about the Hello Kitty Fender Squier Strat’s and Bronco basses when my high school friend was picked to be Fender’s Hello Kitty model. She ended up on the cover of the box like some alt chick version of Michael Jordan and got a couple guitars or something out of the deal. (This is all through the grapevine, I’ll have to ask her about it next time see her.) My thought went something like, “No fair, I want some free guitars from Fender and also she doesn’t even play guitars!” At the end of the day I’m not cute or talented enough to get any free guitars from Fender so I bought my own to try out! 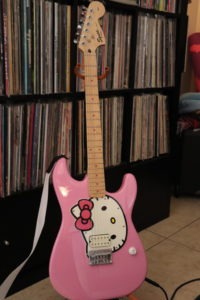 When I started this blog I decided I wanted to get my hands on one of those Badtz Maru Broncho basses since typically I play bass in my band…but I ended up running across a 2005 Hello Kitty Strat first. For whatever reason, people think it’s cool to go crazy and abuse these guitars so you end up seeing a lot of them that are all jacked up. I don’t get why some dudes like to beat up their guitars, especially cute kitten ones, but that’s what kind of society we live in.

Anyways, I got pretty lucky with my guitar. The guitar is in great condition considering I bought it from a woman who could have been no older than 23 and said she had been playing it all her life and was sad to see it go. (Upon further inspection, I concluded she had literally not been playing it all her life, but that’s up for debate. 😁) There is almost no fret wear, the pickguard is in excellent shape and not scratched up, some of the protective plastic bits are still in tact, and it came with the original gig bag, which for some reason seems to be missing both zipper tags but otherwise is in good condition.

The only problem with this guitar is a tiny hairline crack near the neck socket. I pulled off the neck to see how significant the damage is and verified that it does not go through the wood. It probably just took a fall at some point which isn’t too bad considering it grew up with a young kid all it’s life…I mean it is 12 and a half years old at this point…and I know this because when I took off the neck I saw it is stamped October 2005, which also makes it a first year Hello Kitty guitar. 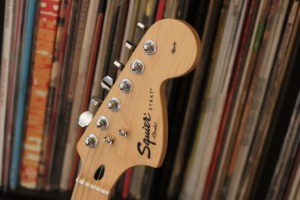 The first thing I did with this guitar was give it a proper set up and some new strings. Like many inexpensive guitars such as the Affinity Fender Squiers, it had fret sprout, some unlevel frets, bad intonation, and high action. All really easy to fix, just needed a little love. I set this guitar up with 9’s (light string gauge) since it’s likely to be played by a young person. After the set up it looked brand new and plays better than brand new!

What I really like about this guitar is that it was designed for kids but it was built like a real guitar. It has a full scale neck so all the notes sound aight, but a smaller scale body so that it fits on a smaller person. I have looked at some of those Hannah Montana guitars from the same time period and they aren’t really even instruments but the Hello Kitty Fender Squier Strat is built for real and has even been seen in the hands of some famous rockstars, including: 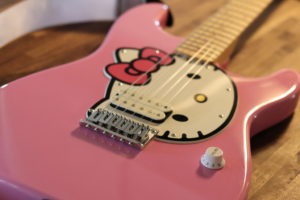 I love that it has a string through body hardtail bridge. Kids don’t need to be messing around with no whammy bars. They just over complicate thing, break strings, make tuning more difficult or impossible if you break a string, and kinda sound stupid. Personally one reason I prefer a Tele over the Strat is because of this.

The strings are kept in tune with some pretty decent sealed tuning machines. They look kind of like the tuners you find on a Standard Stratocaster sans a Fender logo. This is a huge upgrade over what you’ll find on most Affinity or Bullet series Squiers.

The electronics design is perfect for a kids guitar. For the past 20 years I thought I hated Strats unless they had a humbucker in the bridge (ala Billy Joe Armstrong and Tom DeLonge) but really I had only played them through really crappy solid state amps or super high gain stacks so they feedback and sound like an atrocious mess. Anyways, most kids are going to have a crappy little practice amp and just want to play some, “Smoke On The Water,” or whatever. Make life easier for them with a single humbucker and a single volume knob. Trust me, entry level guitars don’t need tone knobs, they are just there so they kinda look like a real Strat or Les Paul. 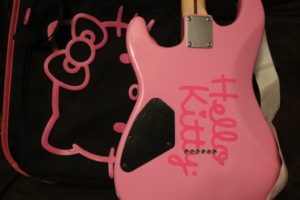 I’m not sure if all Hello Kitty Fender Squier Strats came with a custom gig bag my mine did. This is probably the raddest gig bag I’ve ever owned…I mean I never cared about having a gig bag before, but this guitar is so much cooler with it! It’s just well built and well designed. It’s got Hello Kitty backpack straps, some high quality vinyl screening, the Fender logo is embroidered, on the inside it has Hello Kitty screen protective pads for those scratchy parts of the guitar. The only sad part about my gig bag is that I’m missing the zipper tags so I’m using a zip tie to open it.

I wanted to write about things I don’t like about this guitar, but for a budget guitar it’s really on point. Fender could build this guitar with more expensive parts, but that isn’t the goal of a student guitar. Budget guitars should be upgradable to allow new guitarists to experiment with what they like or don’t like. Some players may want to swap out the humbucker with some super hot metal pickup, while others prefer the pop-punky tones of a Seymour Duncan Invader, so I think it’s best to put in whatever functional humbucker keeps the price low.

I like this guitar so much, Fender should scrap their Affinity, Bullet, and Mini lines and replace them with guitars with these exact features sans Hello Kitty. I understand people want their guitars to be like the famous Strat, but let’s be real, cheap Strats aren’t as functional as this guitar. Not everyone loves Hello Kitty or wants to be ironically funny by rocking a silly girls guitar, but everyone deserves to learn on a very functional guitar. This is a great guitar design that Fender should make at scale.